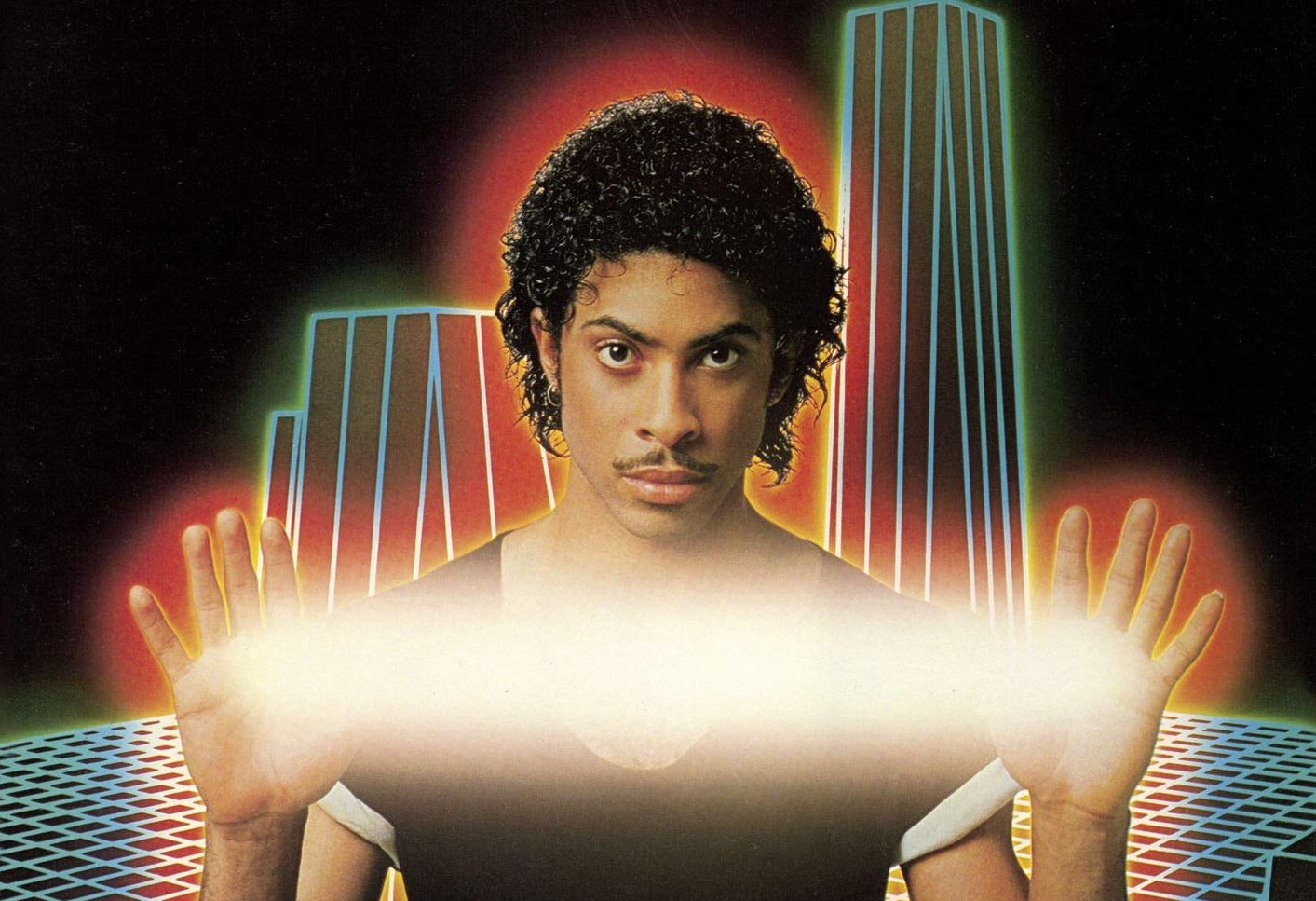 It’s a poetic fluke of the cosmos that so many Jheri Curl Music innovators’ birthdays fall in June, the genre’s holiest month. So far, we’ve highlighted Prince (June 7), Jimmy Jam (June 6), L.A. Reid (also June 7), and Jesse Johnson (June 1)–as well as Michael Jackson, who passed away on June 25, 2009. Now, on the occasion of his 60th birthday, it’s finally time to induct André Cymone into the JCM Hall of Fame.

As Prince’s earliest musical collaborator, André Cymone played an integral, but regrettably overshadowed part in the creation of the Jheri Curl Music strain more popularly known as the Minneapolis Sound. On our Prince associates podcast from a couple of years ago, I described Cymone as the twin Prince (figuratively, of course) consumed in utero. So many of the more famous artist’s stylistic choices in the first three years of his career–from his embrace of New Wave sounds and fashions to the whole song “Do Me, Baby”–can be more accurately interpreted as a collaborative effort between himself and his one-time surrogate brother. By the time André, understandably fed up with the lack of credit for his work, went solo in early 1981, the persona known as “Prince” had been more or less fully formed; this inevitably did his longtime partner a disservice by making his solo career look like an imitation.

But today we celebrate André Cymone not as an imitator, but as the innovator he was. While he may not have scaled the critical or commercial heights of his musical other half, his efforts–both behind the scenes and in the spotlight–left an indelible mark on Jheri Curl Music, and on the last 30 years of pop and R&B in general.

As Cymone explains in the above interview from Detroit local TV show The Scene, the band Grand Central–featuring himself, Prince, and Morris Day of the Time–started in his family basement in North Minneapolis, where Prince also lived for much of his teens. After Prince went solo and got a record deal with Warner Bros., André remained involved: playing bass in his backing band and traveling to California for the recording of 1978’s For You and 1979’s Prince. But Cymone never intended to settle for being a sideman, which became a bone of contention between the two artists.

Alex Hahn’s and Laura Tiebert’s book The Rise of Prince: 1958-1988 recounts an occasion around the time of 1980’s Dirty Mind when Prince offered to let Cymone use his home studio, then “accidentally” recorded over the tapes. The final straw came either when Prince decided to record his bassist’s slow jam “Do Me, Baby” and take the songwriting credit for himself, or when André realized that he would receive no credit for his musical contributions to the first album by the Time. Either way, he left the group in early 1981 to launch a solo career with the help of Prince’s first manager, Minneapolis advertising executive Owen Husney.

Cymone’s debut album, Livin’ in the New Wave, was released in 1982 with, as the title suggested, a sound that split the difference between New Wave and jheri-curled funk. The title track in particular calls to mind Rick James fronting Devo. Elsewhere, “Trouble” brings André’s bass chops to the fore with a funky electro groove the Gap Band would have been proud of, and “So Fine” layers on the synthesizers for an archetypal Minneapolis Sound feel.

The followup to Livin’ in the New Wave, 1983’s Survivin’ in the 80’s, was cut from a similar cloth, right down to the title. The album’s title track dug deeper into the electro side of Cymone’s work, with Vocodered backing vocals, record scratches, and what was in retrospect an ill-advised attempt at rapping. Better is “Make Me Wanna Dance,” a Zapp-inspired jam that does exactly what it advertises. And “Stay” both cools things down and heats them up, a slow-burning love joint served over icy synths.

Like his fellow Minneapolis Sound architects Jimmy Jam, Terry Lewis, and Jesse Johnson, Cymone also kept busy writing and producing work for other artists. He contributed three tracks to Evelyn “Champagne” King’s 1983 album Face to Face, including the title track and third single “Teenager.” The best of the bunch, however, was closing track “Let’s Get Crazy,” which paired King’s seductive vocals with a playful electronic soundscape that would have fit right in on Prince’s 1999.

Speaking of Cymone’s ex-partner, the year of Prince’s biggest crossover success was also the year Cymone was finally able to execute one of his ideas from before he went solo. As we discussed in last year’s Jheri Curl June post, André’s concept for a soft porn-influenced girl group predated both Prince’s Vanity 6 and Apollonia 6, his costars in 1984’s starmaking Purple Rain. But by the time the Girls got off the ground, they were entering a market already saturated by the lakes of Vanity, Apollonia, and Rick James’ Mary Jane Girls. Which is a shame, because Girls tracks like the saucy “S-E-S-E-X” fit right in with the best of Cymone’s solo cuts.

Unfortunately, the Girls weren’t the only André Cymone project that fell short of his royal counterpart’s success. Prince famously threw his old friend a (slightly patronizing) bone by giving him his song “The Dance Electric” for the lead single of 1985’s A.C.; it became far and away Cymone’s biggest hit, thanks in large part to its connection to Prince at the height of his purple reign. Intriguingly, however, the single’s B-side was “Red Light”: a track that Prince reportedly requested–and André refused–for his own 1999. The other singles from A.C., “Lipstick Lover” and “Satisfaction,” inevitably fell short of “The Dance Electric”’s success; but fans of the Minneapolis Sound’s dark, electronic side will no doubt see the appeal.

After the release of A.C., Cymone focused once again on production, where he found his biggest chart success–and his wife of several years–in 2015 JCJ vet Jody Watley. Even if Watley’s 1987 smash “Looking for a New Love” had been Cymone’s only contribution to popular music, it would be a worthy one: the song still bangs 31 years later. Other Cymone productions from the period–such as Pebbles’ 1987  “Love/Hate,” Adam Ant’s 1989 “Room at the Top,” and another classic Watley collaboration, 1989’s “Real Love”–saw him stretching the boundaries of Minneapolis JCM to incorporate New Jack Swing, arena pop, and house music.

Today, Cymone has returned to recording and performing, both on his own–2017’s self-released 1969 was a mature, well-crafted funk-rock album–and with the reunited original lineup of Prince’s New Power Generation. While he’ll probably always be best known to a general audience as a Prince sideman and “The Dance Electric” singer, his reputation for those in the know remains secure; and now, he’s officially joined the ranks of Jheri Curl Music’s most important artists. Happy birthday, Mr. Cymone: we raise our bottles of activator to you.

And with that, Jheri Curl June 2K18 is almost at its end; but we’ll be back on Thursday and Friday for two final tracks. In the meantime, as always, you can listen to our picks so far on the Spotify and YouTube playlists below.