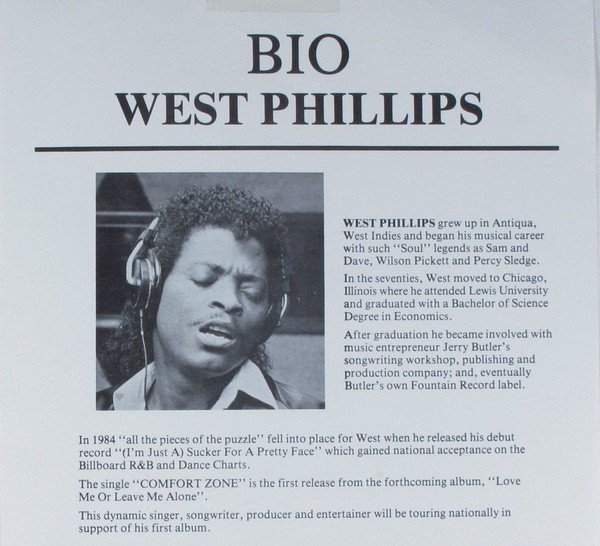 I’ve been sitting on this song for at least two Jheri Curl Junes now, but I always held it back because I didn’t know what to say about West Phillips. The only information and the sole photo I could find of him are both above, stolen from his Discogs artist page; and when I Google Image Search “West Phillips,” I just get a bunch of photos of buff hunks in bikinis by a photographer with the same name (you’re welcome, by the way). Earlier this spring, however, I heard “Sucker for a Pretty Face” on Andrew Joseph’s and Laura Caringell’s Paid Time Off radio show and was reminded of what a monster fucking jam it is. What else do we need to say, really?

In case that’s not enough, here’s some info on West Phillips, all paraphrased from the aforementioned Discogs bio. He was born Everton West Phillips in Antiqua and later relocated to Chicago, where he began his music career working with songwriter Jerry Butler on songs for R&B artists like Sam & Dave and Percy Sledge. He then graduated to work as a musician for Butler’s label Fountain Records, playing on sessions with groups like Omni. Also, at some point circa 1984, he had a wicked jheri curl (see above).

But even if Phillips hadn’t sported a curl, the spirit of JC was clearly with him when he recorded “Sucker for a Pretty Face,” his 1983 debut single and a masterclass in airtight electro-funk groove construction. The thumping “Another One Bites the Dust” bassline, the exquisitely whining synthesizer, the synthetic drum-machine claps and surgical rhythm guitar–all with Phillips’ incessant, pitch-shifting, lightly Caribbean-accented vocals layered on top, complete with a rap featuring the line, “let me get to munchin’ on your lollipop.” What else is there to know? West Phillips is a sucker looking for some sugar; and in the end, aren’t we all?

Keep up with the Spotify and YouTube playlists below. See you tomorrow!