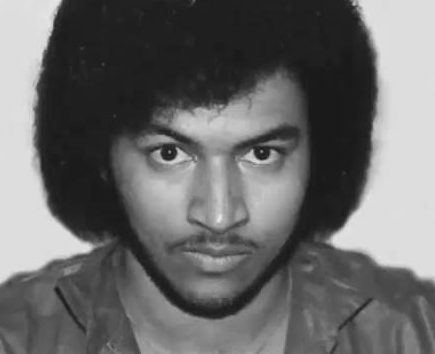 Like yesterday’s spotlight artist the Jonzun Crew, the Egyptian Lover is a pioneer of the Jheri Curl-adjacent hip-hop subgenre electro (or, as they liked to call it on the West Coast, electro-hop). Way back in our first-ever Jheri Curl June, we even called his 1986 club hit “Freak-a-holic” “the ultimate jheri curl track.” And certainly, the Lover himself (a.k.a. Greg Broussard) had one of the most impressive actual J.C.’s of JCJ history, as evidenced by the aforementioned track’s legendary video.

But Broussard was more than just a mixin’, scratchin’, record-lovin’ son of a gun: he was also a sensitive soul, as evidenced by this slow jam from his 1984 solo debut On the Nile. In a 2016 interview with The Guardian, Broussard shared an unlikely source of inspiration for the song: Rat Pack crooner Dean Martin, specifically his 1969 cover of Buck Owens’ “Crying Time.” To be honest, I don’t hear it–partly because Martin sings the song in his indelible, boozy croon, while the Lover doesn’t “sing” so much as pout along with the music. But let’s face it: “Crying Time” also doesn’t feature a shit-hot guitar solo like the one session guitarist Chuck Gentry plays on “I Cry,” so it’s pretty much a wash.

Join us again on Monday for Ladies’ Week, our annual celebration of woman-fronted Jheri Curl Music. In the meantime, you can listen to our picks so far on the playlists below.