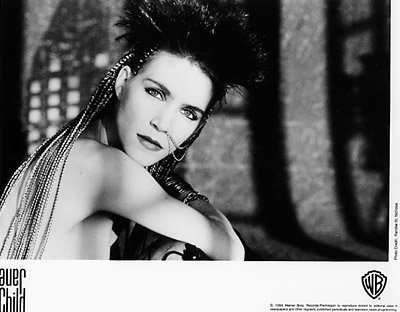 As we’ve mentioned time and time again, while Jheri Curl is both a musical genre and a hairstyle, a jheri curl is not required to make top-notch Jheri Curl Music. Jane Child is a prime example of an artist whose hair consisted of just about everything BUT a jheri curl, but who still made a banger that fits firmly within the JCM genre.

Raised a classically trained pianist, Child wrote, arranged, and performed all of her self-titled 1989 debut, and was referred to by the press as “the female Prince” (like Prince, she was also signed to Warner Bros. at the time). Her first album is a great collection of late-era Jheri Curl Music, with plenty of synthesizer flares to smooth out the late-’80s hard rock guitars. “Don’t Wanna Fall in Love” is a catchy jam that was Number 2 on the Billboard charts for three weeks–kept out of the top spot, ironically, by Sinead O’Connor’s cover of the Prince-penned “Nothing Compares 2 U.”

And with that, our latest Ladies’ Week is complete. We’ll be back Monday for five more days of Jheri Curl June; in the meantime, the Spotify and YouTube playlists have both been updated!