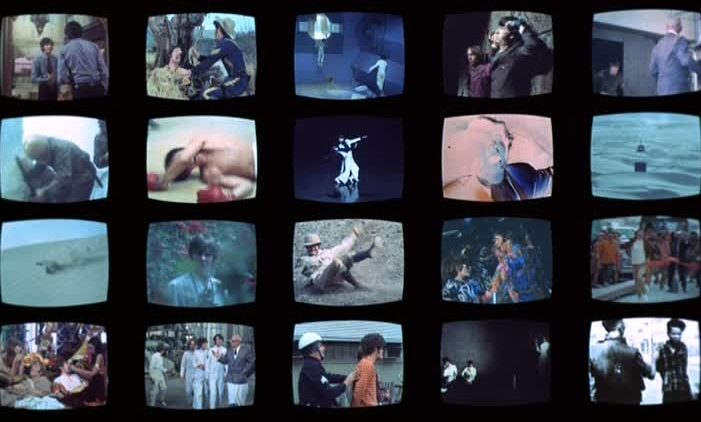 Way back in August of 2014, we had a guest author write a Dystopian Dance Mix called Remedial Sex Ed. What we got was…not exactly what we had in mind. So this time, we’re doing it ourselves, and we’re focusing on a crucial part of human sexuality most public sex ed. courses leave woefully undiscussed: consent.

Unfortunately, even in our fairly sex-obsessed media culture, affirmative consent remains an underrepresented theme in popular music. It occurred to us, while putting this playlist together, that it would have been a lot easier to find the equivalent amount of songs about rape–and that’s fucked up, to say the least. Even the songs we did choose don’t all necessarily have 100% positive or unproblematic messages. But we can at least say that the following 17 songs understand that “no” means “no,” and that it’s important to get permission before engaging in any kind of sexual activity; that, we suppose, is a start.

Look, when you have a voice like the late, great Sylvester‘s, getting consent is easy; hell, the first time I listened to this 1982 Hi-NRG classic, I’m pretty sure I had my clothes off by the end, and I’m not even gay. But even with all his powers of seduction, Sylvester understood that it’s always important to ask. Not all of us can just roll up on someone in the club and ask if they “wanna funk” while hitting crazy high notes; but we can all take his cue and never funk with anyone without their express permission.

Call us crazy, but as far as we’re concerned, Florida rapper Plies is an underrated voice for sexual progressiveness and even, dare we say it, a kind of feminism. His Instagram alone–especially the weekly “Sweet Pwussy Satday” posts–is a font of sex positivity focused on women’s pleasure, all while Plies drawls the word “pussy” (or, uh, “pwussy”) way more than most normal people are comfortable with. So leave it to Plies to boil down the issue of consent to its bluntest principles: “If you ain’t then you ain’t, that’s cool / If you is, then let’s make it happen.” Have any more eloquent words on the subject been spoken?

3. OutKast: “Spread”
(from Speakerboxxx/The Love Below

Along similar lines, this solo feature by OutKast‘s André 3000 is a booty jam that isn’t afraid to ask permission. 3 Stacks may start the song out by attempting to read his partner’s mind–“I think she says that she wants to pour…your…yourself all over me”–but he’s careful not to operate on an assumption: as he puts it on the final hook, “Nature knows that I want you, but / Not unless you want me too.” And things seem to work out pretty well for him, if those pants-unzipping sounds over the horn solo are any indication; consent, as they say, is sexy.

Of course, it’s important to note that the need for proper consent applies as much to women as it does to men. Nina Simone, however, was never one for the meek, humble approach; so, when she asks if you’re “willing,” she can’t resist underscoring the request with, “the answer better be ‘yes.'” But don’t worry: we can tell that she got the answer she desired from the rousing response of her male backing singers and her smug reply, “That pleases me.”

A word of warning to our readers: “body language” is a notoriously subjective form of communication, and can only be interpreted as consent if a certain level of intimacy exists between you and your partner. This goes at least double if you’re, in the immortal words of Big Ghost, “a slightly less trash Tyga replica” who got his rap name from the totally unique characteristic of having a lot of tattoos. If any of the above applies to you, it’s probably best to take a cue from Usher‘s hook and “talk about it” first, just to make sure they’re really “’bout it.”

One fact about consent that’s important to note is that it doesn’t begin and end with the initiation of a sexual encounter; consent can and should be retracted at any point when one or both partners feels uncomfortable or have second thoughts. That’s why feedback and communication is important at every step of the way: just do what 2Pac and R&B duo K-Ci & JoJo do, and ask “How Do U Want It?” Of course, proceeding to launch into a diatribe about former Secretary of the Commonwealth of Pennsylvania and anti-gangsta rap advocate C. Delores Tucker, like Pac does in the second verse, is less recommended and may be kind of a mood-killer; but hey, in the end, it’s about whatever you and your partner are comfortable with.

Under most circumstances, William Ray Norwood Jr., somewhat better known as “Ray J,” wouldn’t be our first choice to represent matters of sexual consent. This, after all, is the same guy who infamously leaked a sex tape made with his ex-girlfriend Kim Kardashian years before “revenge porn” was a widely-discussed issue; the same guy who, in 2014, was accused of groping a woman in a Beverly Hills nightclub and then assaulting the police officer who arrested him; the same guy with the dubious achievement of being the most universally-loathed Norwood sibling, even though his older sister Brandy actually killed somebody. But in this case, we have to give him his due props–even if it’s only to underline the fact that if one of the world’s wackest human beings has the decency to ask “can I” before engaging in intercourse, then no one else has any excuse not to.

One of the more straightforward songs on this playlist, this 1996 cut from the least bad boys on Bad Boy Records is literally all about consent. “Can I touch you there?” “Fingers in your hair?” “Won’t you come and talk to me?” About the only thing they don’t ask is whether it’s okay to play that pan flute over the chorus (it is, I guess, but it’s kinda weird). At least you can’t say they take anything for granted.

For those who weren’t aware, the acronymic title of this early favorite from alt-rock muso goofballs Ween stands for “Let Me Lick Your Pussy.” And if you’re going to make such a bold request of a woman, you could do a lot worse than to preface it with a series of quotes from that recently departed master of unbridled sexuality, Prince. Whether you then continue for another six minutes of porn-flick guitar and pussy talk is entirely up to your discretion and that of your partner.

10. Salt-N-Pepa featuring E.U.: “Shake Your Thang”
(from A Salt with a Deadly Pepa

Along with Queen Latifah, Salt-N-Pepa are every Women’s Studies professor’s favorite rappers. And for good reason; their 1988 single “Shake Your Thang” alone is a dissertation’s worth of analysis about women’s autonomy: the distinctions between dancing and sex, “provocative” dress and consent. As Cheryl “Salt” James puts it in the third verse: “Steppin’ on a dancefloor, think you’re ill / But if a guy touch my body I just put him in check / I said, ‘We just met, we can’t do that yet.'”

German-born, New York-bred R&B crooner Ro James has clearly taken his share of inspiration from Prince–not least in the way he centers this slow jam around the woman’s pleasure. “With your permission / I wanna spend the night sipping on you,” he sings in a gorgeous falsetto. Would that more aspiring seducers had taken this lesson away from His Purple Majesty, and not just the whole “dirty mind” thing.

You’ve probably noticed that we’re a little heavy on R&B for this month’s dance mix; for whatever reason, there just doesn’t seem to be as much rock or country music out there about consent. But at least there’s “Let Me Try” by the MC5–another R&B ballad, but delivered with Detroit rock’n’roll attitude. To be honest, it’s barely about consent, and more just an excuse for singer Rob Tyner to boast about his sexual prowess; but it’s also one of the only MC5 songs about women that isn’t all chest-beating machismo, so I guess we have to start somewhere.

Oh hey, it’s André 3000 again. And to be honest, this time he’s a little less nuanced on the sexual politics front, letting John Legend do the heavy lifting on the whole consent thing while he just flirts shamelessly and throws Robin Givens under the bus for some reason. Still, you have to admire his game when he argues, “Hey, if I were you then it would be me that I’d go home with.” Who among us can dispute that logic?

Dance-pop provocateur Lady Gaga caused a bit of a kerfuffle when she released this ode to relinquishing bodily autonomy in 2o13, with none other than renowned sexual predator R. Kelly backing her up. And, yes, it’s an undeniably weird choice of a duet partner for a song that already treads into murky ideological waters; and, yes, R. Kelly probably isn’t the best person for Gaga to be supporting, given her explicit feminism and advocacy as a rape survivor. But I can’t help but feel like the song, Kellz and all, is a kind of challenge to the listener: after all, the whole point of letting someone “do what they want with your body” is that it’s your permission to give, and what more dramatic (albeit self-destructive) way to demonstrate that control than to hand over the keys to a man best known for urinating on underage girls? Plus, the beat knocks. Sorry, it just does.

As we noted before, men aren’t the only ones who need to ask permission. That’s the lesson D’Angelo learned firsthand after he released the notoriously steamy music video for 2000’s “Untitled (How Does It Feel?).” The video, consisting of four and a half minutes of D’Angelo singing in the nude, turned him into a sex symbol; pretty soon, he was being relentlessly catcalled by women who mistook his concerts for Chippendales shows. There’s a tragic irony in the idea of recording a sensitive slow jam all about letting a woman tell you how she feels, only to end up as a victim of verbal sexual assault yourself. But it just goes to show: ladies, you too need to respect boundaries and keep your libidos in check.

We’ve already mentioned Prince a few times here; I guess this topic just underlines what a gaping hole he’s left in our culture. Because seriously, name one other male artist who could have written a song about vaginas as wonderfully weird and yet deeply empathetic as “Sugar Walls,” the hit song he wrote for Sheena Easton (much to Tipper Gore’s chagrin) in 1984. Sexy right down to its lugubrious beat, which sounds like it’s being recorded in the bathtub from the “When Doves Cry” video, “Sugar Walls” is a vital reminder that consent isn’t just about the woman as gatekeeper, allowing or restricting men from enjoying her body; sex should be enjoyable for her, too. Sometimes, it’s even her idea!

I know what you’re probably expecting. But believe it or not, this album track from Compton‘s own DJ Quik actually has a surprisingly positive, albeit blunt message: “If she don’t wanna give it up…leave that bitch alone.” Words to live by–but maybe if we ever make it to Remedial Sex Ed. 300, we’ll work on the whole “bitch” thing.